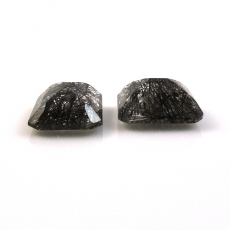 Quartz gemstone is a mineral, one of the most lavish mineral in the Earth's crust, composed of silicon and oxygen. Quartz gemstone can be icy clear or have inclusions, veils, bubbles. It is also known as rock crystal or crystal quartz or universal crystal or clear quartz. People in the medieval times believed in the magical powers of quartz gemstone. The word quartz is believed to come from the German word "quartz," and the word crystal comes from the Greek word "krystallos" which means ice.

Quartz gemstone is known as a power stone that's prized as a healing stone. It is known as the most powerful healing stone of all the gemstones. Quartz gemstone has been called the Universal Crystal because of its many uses and is helpful for healing, manifesting, meditation, and protection and channelling. Because of its ability to balance, quartz gemstone is excellent for harmonizing and stabilizing a person’s environment and is helpful in relationships. It is said to intensify healing energy and is particularly effective for chronic fatigue, arthritis, bone injuries, depression, diabetes, and intestinal troubles. It is also believed to improve mental and physical energy, also increases stamina and physical strength.

Quartz gemstone boosts spiritual growth and wisdom. Because quartz gemstone illuminates thought processes and emotions, it increases inspiration and creativity. It can also help with concentration, studying and retaining what one learns. Quartz gemstone is a magnificent stone can combine with other gemstones and it sparkles like drops in a waterfall. Quartz can be string a variety of many beautiful beads into a single strand or in multiple strands so they seem to flip together. Quartz gemstone can pair with crystal beads for a sparkling statement or black gemstones and gold-coloured components for a dramatic look.

Rose Quartz is one of the types of Quartz gemstone and is similarly known as Lovestone or Bohemian ruby. The colour of this Rose Quartz varies from pink to deep red colour intensifies its uniqueness. Rose quartz is mainly prized for its beautification powers and helps people in their love life and to attract love in one person’s life.